Cottage style gardens can create picturesque landscapes that have their own unique personality and charm. These gardens are brimming with beauty as they showcase delicate pastels and vibrant pops of color, while whisking you away with features like winding pathways, fences, trellises, arbors and benches. Imagine an elegant English garden with a slightly more rustic and wild appeal.

Lush and colorful cottage gardens are achieved through an informal, free-flowering layout. This relaxed design approach ensures that variation and asymmetry are embraced to become an integral part of the garden’s character and charm. Flowers are allowed to cascade over planters and pathways are allowed to wind and meander. Plants are arranged in scattered clumps rather than straight lines and pathways are made from pebbles and stepping stones, instead of neat pavers and perfectly-aligned bricks.

The second-most distinguishing factor of a cottage style garden is the abundance of color and generous placement of greenery. Whimsical, bright color combinations and unexpected accents are created with a mix of flowers, while vibrant vines cover fences and climb arbors.

The key to achieving a gorgeous cottage style garden is through a subtle organization and underlining deliberateness. Choosing a theme to coordinate colors and textures, for example, can help achieve this feeling of “artful chaos” or “happy clutter,” as experts have put it. Enclosing areas in fencing and gravel hardscaping can also help create definition and boundaries.

Traditional cottage gardens are overflowing with flowers and old-fashioned favorites you remember from your grandmother’s garden. These include snapdragon, cosmos and foxglove with the finishing touch almost always being a white picket fence. However, you can achieve your own unique cottage garden that expresses your personality and lifestyle using native plants, your favorite hardy perennials and an iron rod fence. As Sunset magazine’s editors put it, “cottage gardening is an attitude.”

Dargan Landscape Architects can help transform your property into a dreamy cottage garden, while healing the earth and letting nature speak through a healthy and beautiful landscape design. Browse our portfolio, and then contact Mary Palmer and Hugh Dargan at 404-231-3889 to begin discussing a potential project.

There are four main components to a timeless landscape design, one that speaks to us with unmistakable beauty for ages to come. The first piece of this puzzle is “the approach and arrival sequence.” This is what we call the area between the street and the front door. When thoughtfully designed, it can provide a lasting first impression while setting the tone with curb appeal that expresses personality and sophisticated style.

Whether it’s a stately mansion, an expansive rural estate or a smaller urban property, the approach and arrival sequence should be designed to play on the human emotions. The aesthetic perspective of landscape forms and textures and the manner in which the driveway ribbons to the house should evoke anticipation, expectation and excitement. Landscapers, builders and architects have been creating these emotional experiences for centuries. Many nineteenth century English novels paint descriptive scenes of the emotions heroines felt while riding their carriages up a winding driveway and catching glimpses of grandeur estates amidst rolling hills, trees and shrubs.

Unfortunately, this area is not getting the design attention it deserves on many of today’s residential sites. As many homeowners direct a great amount of time and energy into the outdoor living areas where they want to relax and entertain, the front yard and entryway can be left neglected. The drive portal and corridor, the parking court and the entry node may serve very practical functions, but this doesn’t mean they should not be meticulously designed to create relationships between shapes, textures, colors and heights.

This area should be the quintessence of the perfect collaboration of owner, builder, architect and landscape architect. The ultimate goal should be to achieve a harmonious blending and balancing of elements in order to exude refined tastes and dignity.

Here at Dargan Landscape Architects, we create custom designs that tell stories and express the personal style of our clients while letting nature speak. When every design element is approached with precision and care and imbued with purpose, the landscape becomes a beautiful experience for us and a healer for the earth.

Beautiful landscapes require thoughtful planning and a well-executed design plan. That’s why Dargan Landscape Architects has developed a multi-step landscape design process that is both artistic and functional. Our design process helps us create a master plan for your outdoor space, keeping in mind the size and location of the house, the configuration of the grounds and the desires of the owner. In this post, we will cover the first six steps in this process, and we will cover the last six steps in a future post.

1. Make a survey. A survey is a drawing of your property that includes topography, existing trees and shrubs, and the existing or future location of your house and drive. The survey also includes boundaries and easement facts in graphic form.

2. Develop a base plan. The base plan is an overlay of semitransparent tissue on your survey that indicates where two paths cross for the purpose of identifying either how the area can be tightened up or how it can be made into a destination in the landscape such as a garden.

3. Inventory the site. This involves taking an inventory of the existing plants on your site and the space they occupy and placing them on your drawings using circles drawn to scale.

4. Analyze the site. A site analysis takes into account the constraints and potential of your property based on existing environmental and functional conditions such as climate and soil type and desired views.

We will discuss the rest of the steps to our design process in an upcoming post, so be sure to stay tuned for more information. For more on how to create a timeless landscape, pick up a copy of Mary Palmer’s book “Timeless Landscape Design”.

Timeless gardens and landscapes have the ability to make an impact on individuals and speak to us for years on end. As Mary Palmer says in her book, “Timeless Landscape Design,” gardens that were created centuries ago “still speak to use as places of unmistakable beauty as relevant today as ever before.” Your home environments hold the same potential.

To design a timeless landscape that will “Let Nature SPEAK” as we like to say, you should focus on four main components, which we call the Four-Part Master Plan: the approach and arrival sequence; the hub; the perimeter; and passages to destinations. In this post, we will define and discuss these four topics in general and delve into them more deeply in future posts.

The hub
The hub is the central focus of your property, where all the activity originates from. Once you identify your home’s hub you can use your landscape to accentuate it. You will want to envision both inward- and outward-looking views of the hub to guide your landscaping choices. The landscape in this area should help the home blend into its natural surroundings.

The perimeter
The perimeter refers to the outdoor spaces that surround your home and can be accessed from the interior of your home. Perimeter areas can be used for a variety of functions such as dining, reading, entertaining and more and allow you to still be connected to what is going on inside.

By including these four components in your landscape design plan, you are laying the foundation for a beautiful and memorable space that is timeless. Defining these areas also helps divide the large task of designing an entire landscape into smaller, more manageable pieces.

For more details on this topic, order a copy of “Timeless Landscape Design” by Mary Palmer Dargan, and contact Dargan Landscape Architects for professional landscape design services. Our team is ready to discuss your needs, be it a master plan or a tune-up!

We encourage homeowners to look at different gardens around the world to draw inspiration for their own landscapes. There are so many gorgeous spaces that offer unique selections of plants, flowers and textures that appeal to the senses. One that we are very fond of is Hidcote Manor & Garden, a National Trust Garden located in Cotswolds, not too far from Stratford-upon-Avon in England. 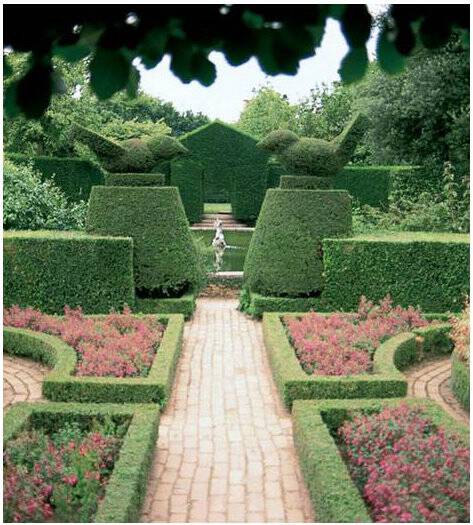 Hidcote is a product of the very talented American horticulturist Major Lawrence Johnston. He created this masterpiece throughout the first half of the twentieth century around his Tudor-style home. From 1907 to 1914, Johnston concentrated on developing the gardens closest to his home. His most significant works during that period include the Maple, Fuchsia and White Gardens, along with the Bathing Pool. These spaces were designed formally by intention.

Over the next six years, Johnston began creating garden rooms, featuring designs heavily influenced by classic French and Italian styles. He also designed a space called “Mrs. Winthrop’s Garden,” featuring a Mediterranean theme. During this time, Johnston also created the plans for numerous pavilions and the Stilt Garden, which form part of a corridor along the west end of the house.

In the decades that followed, Johnston continued to expand the gardens, adding the Long Walk and the Pillar Garden, before finally presenting the National Trust with Hidcote in 1948. Now, visitors come to Hidcote by the thousands each year to marvel in Johnston’s works, which are “always full of surprises.”

What inspires us most from Hidcote is its utilization of permanent color all year long, as well as how this garden is set up to create vistas and inward views beyond the enclosed garden rooms. As stated in our book, Timeless Landscape Design, Hidcote’s “level of horticulture is unsurpassed, with borders in theme colors, hidden rooms, the use of form, repetition, and focalization.” In just a few words, Hidcote is simply breathtaking.

Are the elements of Hidcote or another garden inspiring your thoughts for your own garden oasis? Contact Dargan Landscape Architects, and let us know what you’d like to see in your landscape. Either in person or virtually, we can take what you find inspiring and create a master plan or a tune-up for your own personal retreat.