Herb Society of Nashville’s annual meeting featured new and old friends from over the US! Mary Palmer lectured on Timeless Landscape Design to a packed and happy audience of 350 at the Vanderbiilt Plaza Hotel. A native of Nashville (6th generation), Mp became a member of the Herb Society while in high school, or at least went to the meetings at a very tender age! Now a Rosemary Circle member (25 yrs membership) for over a decade, MP received her first scholarship from the HSA while a botanist at Cheek Botanical Gardens in Nashville in 1976.

This launched her career as a landscape architect when she attended Louisiana State University and began her thesis 2 years later on “The Early English Kitchen Garden: 800-1800 AD”, pub 1981. Still in print, the little blue book sold out as did Timeless Landscape Design. (see image of early distillery in medieval kitchen garden)
The introducer, HSA president  held up the two volumes to the crowd and said ..” These two books describe Mary Palmer Dargan’s evolution as a writer, botanist and landscape architect for over three decades”. While at the meeting, MP purchased a first edition of Bernard M’ Mahon’s The American Gardener’s Calender, 1806, Philadelphia, the first book on gardening published in America and an influential text in her research. Bookseller, Kevin T. Ransom of Amherst, NY had a fantastic display and Mp found a copy of the Picayune Creole Cookbook, New Orleans 6th ed, 1901-1922 with original painted cover.
The conference held

Needless to say, Mp blew all her book sales proceeds on this one book! What a way to remember a conference!! 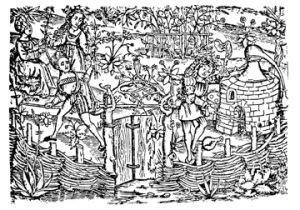